The rare mystic and the wonder of nature is when three of Rudraksha are joined together to form a single entity. This is what is commonly called the Trijuti which is known as the form of Tribhagi, Gauri path, or Brahma-Vishnu-Mahesh or Trinity. It is the most auspicious bead that represents all the symbolic of basic characteristics of the universe and known to bestow universal appeal. It has a great power to represent the personality of people and provides the wearer with the power to control over difficult situations. This bead is the manifestation of “OM”, the essence of ultimate reality or consciousness of the universe as the Atman. Om is the powerful form of Brahma-Vishnu-Mahesh as whatever existed, whatever exists and whatever will present. As per the Vedas, the sound of Om was first created before the universe before the beginning of time and all the universe has been bloomed. The chanting of mantra Om resonates with universal vibration that entirely represents the cosmic principle or supreme spirit and elevates the higher self of ourselves as well as connects the highest divine principle. 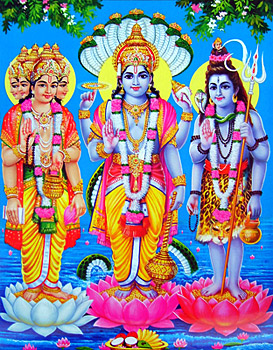 There are Trijuti of the various types found in the nature-based on the shape and size of all three beads. Three beads having a uniform in its shape and size is of extreme rarity and only produced within many years. As the Trijuti Rudraksha is regarded as one of the best and auspicious beads that can fetch many lakhs of a rupee per bead. That’s why one should only buy it from authorized dealers having a good profile and experience. That’s because, adept craftsmen normally take a genuine Gaurishankar Rudraksha and another single bead exactly matching the same shape and size, color, contours, and amalgamate them using high precision, technology, and high-quality adhesives. Before they can be detached by boiling this bead in the water for more than 2 hours but the modern adhesives made from high technology made it very difficult to distinguish its genuineness. Even though it’s difficult to distinguish, one can observe its discoloration over the entire surface and differentiate its authenticity. The total number of mukhi of Trijuti can be structured by any number but the Trijuti made from total mukhi of 14, 19, 20, and 21 are considered to be extremely rare and possess high quality. More importantly, Trijuti which contains one mukhi bead among 3 beads has known to be a rarest, prominent, and powerful bead. Because of its divinity power, it takes some time to synchronize this Rudraksha with the energy level of the wearer and the wearer is likely to experience some kind of unusual feelings and weird dream for the few weeks.

The mantra to be recited for the Trijuti Rudraksha according to the Holy Scriptures are:

This bead is the supreme representation of Trimurti, Lord Brahma, Lord Vishnu, and Lord Shiva which executes the cosmic function of creation, maintenance, and destruction respectively. The wearer of this bead is bestowed with the great intuitive power of the mind that develops extremely creative, intellectual, and sharp acumen power. The wearer will have an extremely unique type of personality where prosperity, success, and happiness come as an integral part. Only a few people can get this bead and blessed with complete dominance over difficulties and hurdles. Because, its problem mitigating capacity, it is extremely important for perfect leadership quality. The invincible power emitted by this bead expels invisible dark forces, bad luck, and negativities.

As per Hinduism, the Trinity gods are the manifestation of e concept of the transcendent and immanent ultimate reality, supreme cosmic spirit. All other gods are the divine creation of Trinity gods (Lord Brahma, Lord Vishnu, and Lord Shiva). So, the wearer will be blessed by the divine power of all the gods and attains a higher level of good Karma. The tremendous amount of energy is bestowed over the wearer that pacifies all the negative effects he/she is prone to. Because of the divine power of all the gods, the wearer is blessed both by spiritual and materialistic energy.

The Trijuti Rudraksha is regarded as one of the mightiest beads of nature and highly demanded by most of the customers than other beads. It is highly recommended for those who want to enroll in leadership qualities such as political leader, businessman, project leader, community leader, leader of a certain group and activates great names as well as fame.