The seven Mukhi Rudraksha mala is the amulet of the Goddess of wealth, Mahalakshmi, and carries her divine blessings, hence also known as Laxmi Mala. With natural light brown in color, it is made up of the combination of 54 + 1 number of Nepalese variety beads with seven lines or mukhas on its surface. The one extra bead in this combination is known as the meru or sumeru. The blessings from Goddess Mahalakshmi makes the life of the wearer full of prosperity, wealth, financial stability, and abundance. It is a remover of miseries and poverty from the person’s life and provides never-ending success, financial gains and a reliable source of wealth. According to Padma Puran, the seven mighty and divine snakes reside in the seven partitions of 7 mukhi Rudraksha that protect a wearer from any kind of deleterious poisons and malicious threats.  The ruling planet of the seven mukhi Rudraksha mala is the Saturn that helps to relieve the malefic or adverse effects such as Sade Sati and Small Panoti of badly positioned Saturn in the birth chart of the wearer.

Each bead of seven mukhi Rudraksha mala is identically blessed by & sages (Saptarishi) that bestows the wearer with good health and prosperity in their life. Because it is blessed by the Goddess Laxmi, this Rudraksha mala always attracts wealth, prosperity, luxury and helps in regaining block funds. Therefore, it is exceptionally beneficial for businessmen and professionals from all the sectors to achieve Success, Happiness, Promotion, and Wealth. Spiritually, it energizes the Solar Plexus Chakra which enhances the center of the dynamism, energy, will power, and the energy of the third chakra from the wearer’s life.  As per the Ancient Scriptures, the seven mukhi Rudraksha mala is therapeutically beneficial for the treatment of various kinds of diseases like Arthritis, Asthma, Paralysis, Impotency, Pains in the neck and lower back Foot related diseases, Weakness, Stomach ache, Epilepsy, Dumbness, Abortions, Problems in women, Purification of Sperms and Flow of Ojas ( divine energy ), Respiratory disorders, etc. Blesses by the joint effects of many powerful Gods and Goddess such as Lord Shiva, Goddess Maha Lakshmi, Saptrshi, seven Divine Snakes, seven Divine mothers as well as planet Saturn, this Rudraksha mala is the invincible talisman to accomplish good Name, Fame, Progress, Wealth and Good luck. This mala is strung between the tassels in a traditional fashion and can be worn regularly touching the body/heart keeping inside the cloth. Wearing this mala and chanting the Beej mantra for 108 times bestows the wearer with full of energy and positive vibration.

It is the ultimate remover of the anxiety, worry, and discontentment of the wearer.

P.S.: The premium quality of seven mukhi Rudraksha mala is available in Nepal that is completely efficient, heavy, smooth, and of high quality. 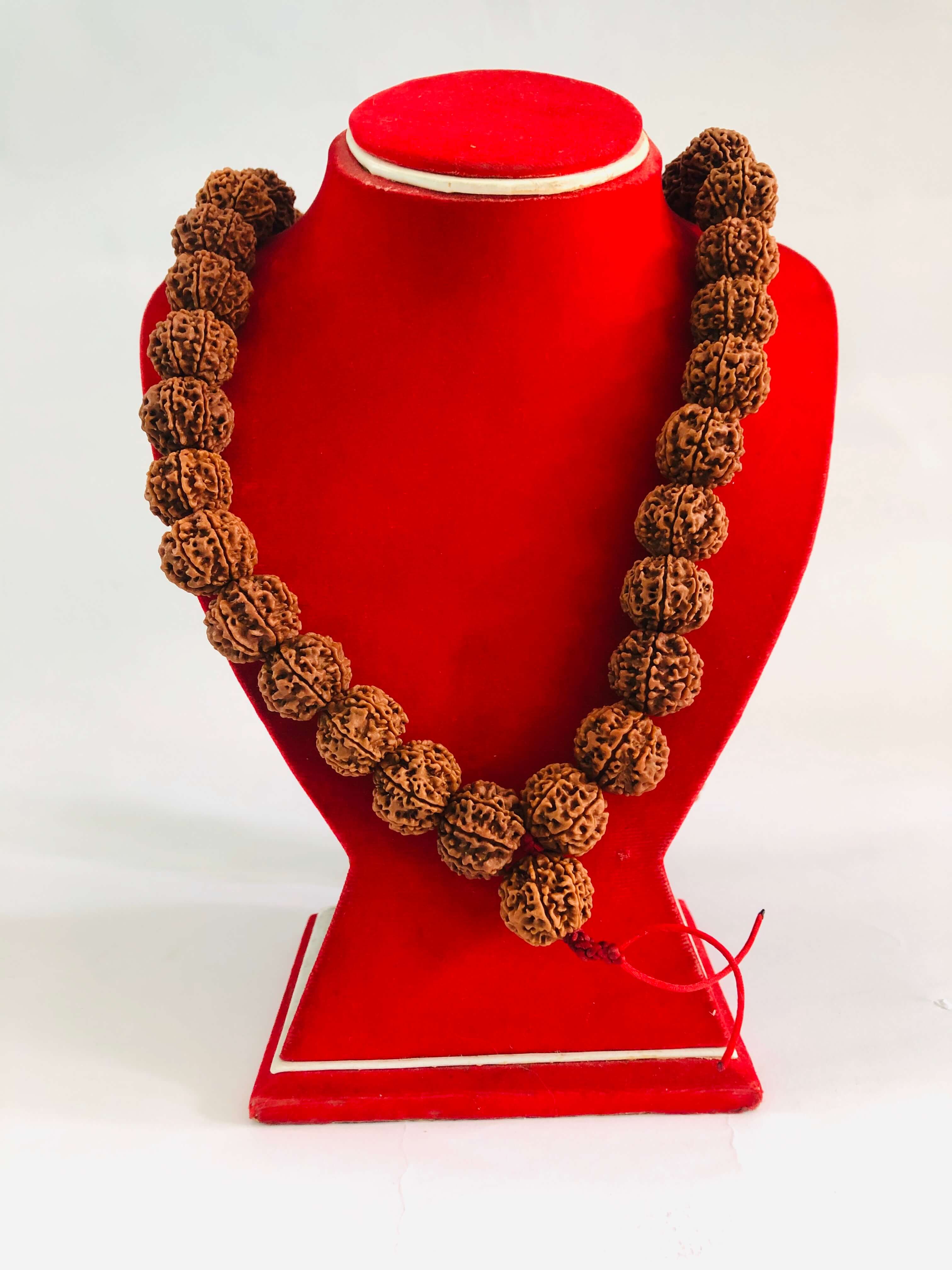