Ø   A Rudraksha with three face delivers all the fruits of Sadhana. As a result of its power, all lore become firmly established.

As per Hinduism, the universe is enforced by three divine principles and powers i.e. Lord Brahma, Lord Vishnu, and Lord Shiva or executive form of Creation, Preservation, and Destruction respectively. That’s why Hinduism has a very significant relationship with number three.  The three mukhi Rudraksha is blessed by the three-faced Rig Vedic deity, “Agni (fire)” deva who is very fiery and powerful but also symbolizes the trinity Brahma, Vishnu and Shiva. As Aghnidev is the god of fire, which burns and consumes everything into ashes, yet remains pure and full of potential power. Just like it, the three mukhi Rudraksha cleanses all the sins incurred by a person in his past life and makes him pure on a spiritual path like Agni dev acts with all those who get nearer in its contact. The wearer of this divine bead attains freed from negative energies and past karmas, leading oneself towards salvation (Moksha).

Aghi as fire is portrayed as one of five fundamental inert impermanent elements (Panch Mahabhutas) along with space, water, air, and earth, integrates to form the empirically perceived material existence as per the Rig Veda. The semen of Lord Shiva was, once, handed over Agnidev for its safeguard but the heat blazing from this seed has become intolerable even for Agnidev who is regarded as the god of fire. So, the Agnidev safely handed this seed to Ganga and she in turn placed it in the Sharavana reeds. Later, this seed eventually emerged as the Lord Kartikeya who slays down the evil and monstrous demon Tarkasur.

Our holy epic, “Padma Puran” explained this Rudraksha to Brahm (the Supreme Lord) that helps to solve all the difficulties one may face in their life and brings excessive success.  It is with this flames of Agni dev that keeps a person very warm and on wearing this bead after proper siddhi, all the past deeds of negative nature are washed away and acts as antidote for those who suffer from depression, anxiety and guilt induced complexes. This bead purifies the soul of the wearer and wards off other negativities, depression, anxiety, psychosis, or guilt induced complexes leading a life of person enriched with tranquility and glamour.

The efficiency of the Nepalese three mukhi Rudraksha is, more superior to other variety, favored by most people. The Nepalese variety is comparatively bigger in size with more sharp and deeper three natural lines or Mukhas on its surface than the Indonesian variety or the Haridwar/Dehradun variety. The ruler planet of this Rudraksha is known to be Mars that helps in subduing the negative effect and boosting the positive effect of Mars.

The mantra to be recited for the three Mukhi Rudraksha according to the Holy Scripture are:

General Benefits: - This bead has a huge positive impact on those suffering from the inferiority complex or fear of unknown or those experiencing self-hatred, guilt, and depression. It minimizes intense mental strain or stress of person such as memories of hurt, shame, anger, and make them more energetic by freeing unanticipated laziness. The three bead Rudraksha is worn around the neck to solve all the problems of a person and achieve great success, fame in their life. Mostly women and children get benefitted from those who are having bad times and prone to accidents. The blessings of the Hindu trinity gods always by the side of the wearer, live an extraordinary life full of happiness, daring, conveniences, and enriches self-esteem.

Spiritual Benefits: - According to the Shrimat Devibhagawat, this Rudraksha condones the sin of the person as high as doing abortion whereas as per Shiva Puran, it is basically famous for the remover of all kind of sins done by oneself that may have been past karma or present deeds. It has an alleviating effect on one’s mind and body by deleting retrospective memories full of lamentable moments.

Medicinal Benefits: - This is an auspicious type of Rudraksha for disorders like blood pressure, diabetes, infection of the blood, cholera, swellings, weakness, etc. Most of the people these generations are suffered from diabetes and are greatly benefitted from these types of beads. Apart from these diseases, it has a pivotal role against disorders of sex glands and adrenal glands, cold and coughing, cleansing arteries, fear, and emotions related problems. It is regarded as good medicine for deadly disease cancer.

Astrological Benefits: - The main controlling planet for this type of Rudraksha is Mars which is regarded as the Commander in chief of heaven as well as the god of war. According to astrology, the mars is the planet of extreme anger, fire, desire, action, and energy. By wearing this Rudraksha will eliminate the malefic effects like land disputes, accidents, feeling of inferiority, kidney problem, disturbed menstrual cycle, fearful, self-hatred, mental problem, etc. More importantly, the negative power of Mars for a temperamental person is expurgated by using this divine bead and also pacifies a malevolent effect of Mars referred to as “Manglik Dosha” in their birth chart. According to our testimonials, we are getting very positive feedback on achieving concentration, success in research, and academic field from the customer of Everest beads in the modern scenario.

Those people who are suffering from the long term problems or diseases, weaknesses, laziness, or inferiority complex should definitely prefer this Rudraksha. According to holy epics and our testimonials, this bead has been an excellent choice for skin diseases, stomach disorders, or eye defects and in controlling stress as well as in gaining self-confidence. The children below age six can freely choose one bead to wear while the adults can wear nine beads of Nepalese variety. 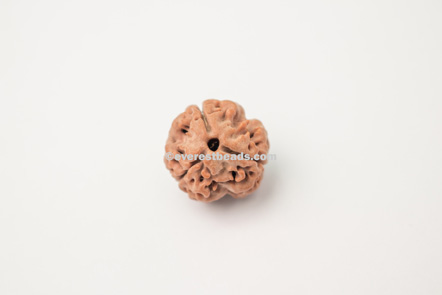