The highest and the most powerful bead found in nature is twenty-one Mukhi Rudraksha which is blessed by Lord Kubera, the treasurer of the god and king of Yaksha in Hindu culture. He is extolled as the semi-divine Yakshas who, not only distribute wealth but also balances and guards all the treasures of this universe. Hence, he is well-known as “Guardian of Wealth” in Ancient texts. This is one of the rarest beads of nature and only a lucky person among the mass of millions may find it luckily. Lord Kubera is the great devotee of Lord Shiva and it is only due to his divine blessings that he has acquired the status of the Wealthiest god, Gana Chief, and Kingship of Yaksha. According to most accounts, he ruled the golden city of Lanka and used to travel in his Pushpaka Vimana, a flying palatial vehicle. But, his half-brother Ravana later conquered this glorious city, seized his Pushpaka Vimana, and ousted him. Distressed with a stepbrother, Ravana, he left Lanka and resides in Alakapuri near the god Shiva’s home on Mount Kailasa. The wearer of this bead achieves abundant wealth, immense prosperity, materialistic desires, physical luxuries, and a limitless amount of property not only for him/her but for many of his/her future generations. Good luck and good times never turn its back as long as this mystic bead is available to a person. 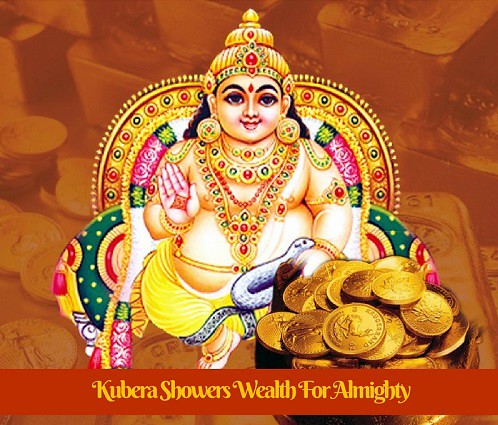 Fig: - Lord Kubera
Because of his authority over Treasure, he is also regarded as the Vitteshwaraye (god of finance). Without his consent and permission, even goddess Laxmi couldn’t bestow her grace to any individual because of her control fortune and fortunes comes along the wealth of individual. Kubera’s lineage is quite equivocal as per different sources and different literature varies distinctive family lines. It is said that he is the descendent of Lord Brahma as the son of Vishrava and Illavida. The Vishrava in turn is the son of Pulastya who is the son of Lord Brahma. According to mythology, once the Kubera went into a deep state of penance or meditation in the name of Lord Shiva. With his devotion, the Lord gave him his divine form of light in front of him but Kubera couldn’t bear this shining form of Lord Shiva’s blinding refulgence. So, Lord Shiva gave him the power to see his divine light but he saw goddess Parvati making his eyes widely open. The goddess became so wrathful to see his envious glance and punished him by detaching his one eye. But the Lord was so pleased with his penance and blesses him with the master of treasure or the in-charge of wealth. Hence, the Kubera is also known as Ekaksipingala (the one with a yellow eye). With these incidents, it signifies that all the fortunate people who pile up immeasurable wealth through hard work or some providential moment should have to encounter several covetous people who are envious of their success. Therefore, wearing this powerful bead shields the wearer from any menacing activities caused by people or evil spells or any dangerous attempt. The mantra to please Lord Kubera is as follow:
ॐ यक्षाय कुबेराय वैश्रवणाय धनधान्याधिपतये
धनधान्यसमृद्धिं मे देहि दापय स्वाहा॥
Om Yakshaya Kuberaya Vaishravanaya Dhanadhanyadhipataye
Dhanadhanyasamriddhim Me Dehi Dapaya Svaha॥
The twenty-one Mukhi Rudraksha is as rare as one mukhi round Nepalese variety and if someone finds this bead, then he/she should secure it with the greatest guardianship. The buyer of this Rudraksha may encounter many fake beads exceptionally crafted from wild berry with great precision. Therefore, one should be extremely leery about its genuineness as it is not abnormally big but almost at the size of 16 or 17 mukhi Rudraksha. As the wealth and health are an integral part of this bead, twenty-one mukhi Rudraksha is responsible for the enlightenment of intuitive power related to third eye chakra which governs sharpened skills, clairvoyance, the higher level of awareness, etc. While enjoying the luxuries of life, this Rudraksha erases all kinds of threats, malicious diseases and provides a divine shield from any kind of tantric influences.
Even the destitute person quickly becomes extremely deep-pocketed if he/she gains this mystic bead. It is the best for everyone but most importantly highly qualified for risk-taker individuals like a business, owners of multiple companies, political leaders, directors, legal consultants, etc. The owner of this bead never feels any kind of hurdles or difficulties in their success, wealth, health, and prosperity.

This is the supreme Rudraksha that denotes Lord Kubera who is responsible for the wealth, property, and prosperity of people. That’s why, the wearer blessed with plenty of wealth and prosperity from the divine energy of Lord Kubera, very good health, happiness, and all materialistic pleasure. The good fortune and profuse success always stay behind the wearer as an integral part of this bead. The power of name, fame, and abundance of people get harnessed in which the wearer is respected by people from all walks of life and reach into the top level of authority. The high level of power deserving individuals like senior officers, big businessmen, politicians, directors of multinational companies, actors, producers, and directors are blessed for ambitions to reach the top of their lines. It’s like an armor plate to safeguard from various negative and dark forces, evil energies, as well as all the Tantrik and evil practices, are thrown into the bay. This Rudraksha beads also helps in the spiritual advancement of the wearer, unlocks the third eye chakra and also gives him sixth sense and clairvoyance abilities. Therefore, this is the perfect and one of the highly precious powers of the universe that ward off every complication as well as misfortunes of the wearer and make him/her an ideal human being.

Twenty one Mukhi Rudraksha is jointly blessed by Lord Shiva and Lord Kubera and facilitated by a higher level of spirituality with a blissful mind. After the attainment of the highest spiritual level, the wearer discovers all the progress, pleasures, freedom, and happiness with the serene mind in this world that in turn leads to Moksha or Nirvana (Salvation) at the end of the life.  As soon as the owner of this bead performs proper Sidhhi (proper purification and charging with Mantra), the wearer of this Rudraksha mark him/her as a sincerely religious person and will deeply be involved in Bhakti (devotion). The black eye, dark magic, and evil power do not have the strength to withstand in front of this bead.

For sustainable health of the human body, this bead has been found to be exceptionally power contained with much mysterious power. It is the manifestation of mysterious power and exceptional healer against mental diseases such as stress, anxiety, depression, fear, and worries. It is extremely beneficial for people desiring to live a long life. The therapeutic power of this bead helps to retain male potential male power, fertility, and maintained an even flow of 108 frequencies in the human body. As per ancient Vedic texts, 21 mukhi Rudraksha is known for the curative weapon against the diseases of reproductive organs.

The divine power of Lord Kubera who is the god of wealth and Lord Shiva, the supreme power of this universe, has the potential to control all the nine planets. That’s why it is the ruler of all nine planets and pacifies all the malefic effects.

The twenty-one Mukhi Rudraksha is an excellent talisman for different business minded personals like an online trading business, stock market, owner of the multiple companies, legal consultants who always wants to run different profitable enterprises. Those who are searching for name, fame, success, and prosperity in their life should find out this bead to accomplish it serendipitously. However, some people need a higher state of power to quench the thirst of their ambitions or dreams. Therefore, such individuals who want to reach the apex point of a career like senior officers, big businessmen, politicians, directors of multinational companies, actors, producers, and directors should wear this bead to live in their passion.
All Small Medium Collector
Relevance Latest Price, low to high Price, high to low 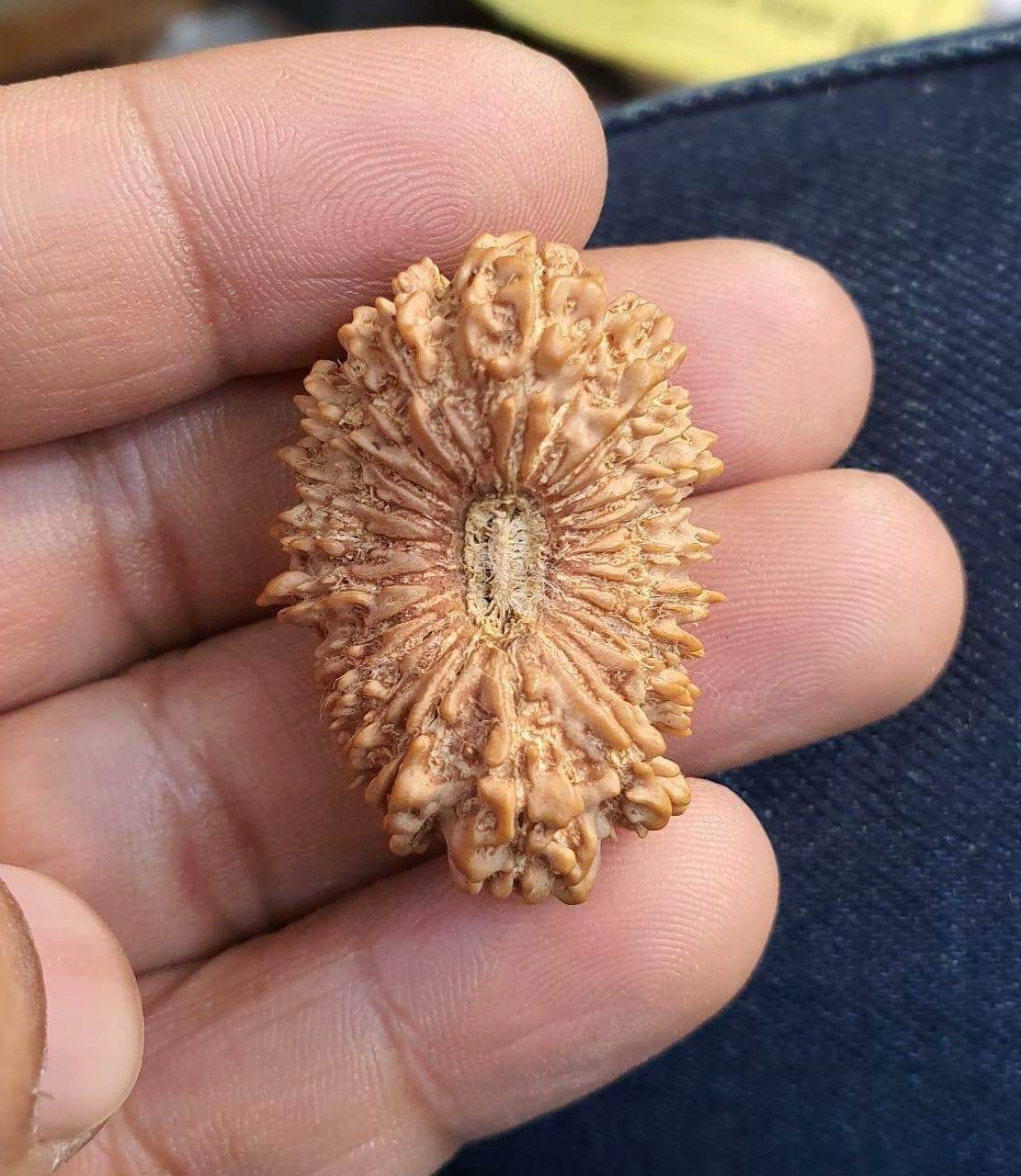