The twenty Mukhi Rudraksha is an extremely rarest bead found in nature and represented as the divine form of Brahman or Para Brahma which is the highest self, ultimate and absolute reality of this universe beyond all descriptions and conceptualizations. It is described in the Hindu texts as the eternal source of universe that is pervasive, infinite, eternal truth, and bliss which never changes but is the cause of change for everything as per the metaphysical concept. It represents the Vedic trinity Lord Brahma, Lord Vishnu, and Lord Shiva as the highest form of God as the formless creator, sustainer, and destroyer of all life. This bead eternally pervades everything, everywhere in the universe, and beyond existence in which the divine power of these centers are thoroughly established inside twenty mukhi Rudraksha.  In its recapitulation from, Para Brahma is the supreme reality of the invisible principle, unaffected absolute and resplendent consciousness which is eternally constant reality (where the observed universe is lied upon a matter of transformation and temporarily existed) from where everything self-originates, executes and destroyed for origination.

The twenty Mukhi Rudraksha embodies twenty different forms of divine energy from different sources.  The power of ten Digpals along with the power of nine planets and the divine power of Trinity all together converged into this mystic rear bead. According to scriptures, the nine planets are depicted as Sun, Mars, Mercury, Venus, Jupiter, Saturn, Moon, Rahu and Ketu (last two planets as shadow planet) and ten Digpals, who are the master of all ten directions, includes Agni, Indra, Varun, Soam, Vishnu, Vrahaspati, Vayu, Kuber, Zenith, and Nadir. Symbolizing it as the knowledge, wisdom, and grace of divine energy, it advances learning, evolving with immense power that results in the enjoyment of material success. Whereas the wisdom enlightens your analytical power to enjoy it proportionately through the entire lifespan. This bead is also treasured by the spiritual attainment at every element of the universe that bestows peace of mind as well as sharp eyesight as per Ancient Vedic Texts. Most importantly, wearer of this divine bead is blessed with the immeasurable divine knowledge of creation philosophy, science, art, music. While offering worship with deep veneration, the wearer can harness immense wealth at any business, project, or position of top authority, he/she chooses and bounce a great height of success. The existence of Para Brahma is eulogized in the Scripture as follow:

Ancient scriptures described the period of the universe at four different Kalpa or Yuga and at the end of four Kalpa, the whole creation will be destroyed to initiate another cycle of the universe. And, there is another ultimate reality or absolute truth which is the supreme source of every particle and higher than Trinity as per Rig Veda. This Rudraksha is the divine form of all nine planets, ten Dighpals, and representation of Para Brahma that can unlock the portal of fortune, good luck, and prosperity showered by Lord Kubera. So, it is regarded as the true boon to mankind and one should handle it with great care as well as with reverence.

The twenty Mukhi Rudraksha of Nepalese variety is extremely rare in one season which can be found only four or five pieces per year.  It has got sharp twenty lines originating from top to bottom around its periphery. It is also very difficult to recognize genuine bead in the pure form because of the fake beads crafted by expert craftsman that is likely to mislead the customer.

The mantra to be recited for the twenty Mukhi Rudraksha according to the Holy Scriptures are:

The supreme power or absolute consciousness of the universe, Para Brahma is present at every cosmic particle and this divine bead is the only tool that represents the indescribable mystery of present realism. The wearer of this bead receives the divine blessings of Holy Trinity (Lord Brahma, Vishnu, and Mahesh), Eight Digpals, and all the Nine Planets that lead to the attainment of materialistic achievement and spiritual path. The supreme universal principle blesses the wearer with immense knowledge related arts, science and music, philosophy, the energy of creation, intelligence, and prosperity. It is an only mystic bead that possesses the power of visualization at everything the wearer perceives in a completely unusual way. Because of its intuitive creativity, it’s the best source of power for great academicians such as researchers, scientists, and meta-physicist who aims to invent a completely surreal postulation. This bead is polished with dual characteristics of a peaceful and calm mind through spiritual attainment as well as the power of immense wealth and prosperity through materialistic achievement. With these additive constant, it bestows with a powerful mind, financial growth, career growth, authoritative position in life, a state of fearlessness, health benefits, and able to achieve a great height of fame in the society. Moreover, it is also regarded as a provider of protection against Snake Bites if held in hand or worn around the neck as per Ancient Vedic Texts.

Twenty Mukhi Rudraksha is a central source of energy or creator of this universe and connected to Para Brahma spiritually. It enlightens the spirituality of wearer and provides a taste of another dimension facilitated by the power of intellect mind, deeper level of consciousness, and rebirth of blissful mind. With continuous progress in divine faith and spiritual knowledge, this bead is the most powerful one for religious people to perform spiritual practice like meditation and dhyana or concentration. All the worldly desires and pleasures will be fulfilled by wearing this bead and also wards off all kinds of evil forces. The wearer of this mystic bead achieves equilibrium level of energies in the body that makes a person more solicitous and soft-hearted.

The twenty Mukhi Rudraksha is the divine manifestation of the power of the universe to cure many of the incurable diseases. It is extremely beneficial for stress level, neurological disorder, diabetes, and unbalanced blood pressure. More importantly, it cures many detrimental diseases such as autism, paralysis, Alzheimer's, and bipolar disorder. The blazing energy of this bead alleviates arthritis, deafness, and knee pains rheumatism and mitigates all inauspicious effects of nine planets.

As this the master divinity power of universe that has the power to control every cosmos particles, celestial bodies, and of speculation. That’s why it is the ruler of all nine planets and pacifies all the malefic effects.

The twenty Mukhi Rudraksha should be worn by a potential person who wants to achieve everything in their life i.e. every aspect of human life such as name, fame, wealth, happiness, prosperity, good health, the fulfillment of every desire, etc. It should be worn especially by the public administrators, homemaker, businessman, and high authority who requires an enhanced level of knowledge, visual power, and great height of success in their life. 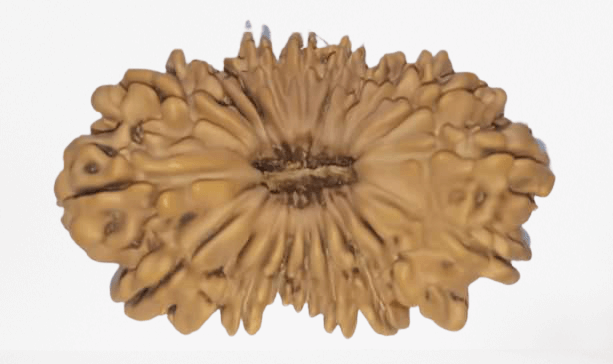