·         Twelve faced Rudraksha is the synonymous form of dwadasa-aditya, the twelve forms of Sun god, “Surya”. One shall wear it on the hair of the head.

The ruling planet of twelve mukhi Rudraksha is blessed by the solar deity in Hinduism, the twelve Adityas, or Sun. The Sun is considered as the source of all life and symbolized as a dispeller of darkness, one who empowers knowledge, the good and all life as per Rigveda. The Surya’s (Sun) iconography is personified as the god traveling across the sky in his golden chariot harnessed by seven horses which depicts the seven colors of light and seven days in a week. The consort of the Sun is Chhayadevi (Goddess of Shadow) and sons are Kaakvahan, Shani, and Yam. All the living organisms, herbs, medicinal plants acquire their life and properties through Sun. The Sun is the Lord of the Sapphire (Manikya), a precious gem which can correct the malefic effect of Saturn and Yam.  According to Padma Puran, the wearer will be blessed by the freedom of the fear of fire and diseases so that the person can acquire an enormous amount of wealth and happiness. With the offerings from Sun, the person won’t have to taste penurious life. As per the Shrimad Devibhagwat, this divine bead is an excellent tool to ward off the fear of armed men, horned animals, and lions. He/she is freed from the heinous sins incurred due to killing animals like elephants, horses, rats, rabbits, tigers, foxes, and even men (in wars and self-defense). It has the ability to bless the person with fearlessness and trouble-free so that the person might not have to experience physical and mental hardships.

The Rudrakshajabalopanishad describes this type of Rudraksha as the divine form of the Lord Vishnu who receives the power, brilliance, intelligence radiance from Lord Narayana. According to our testimonials, it has been received as the power of nature to cure several diseases of precious mankind. According to Atharvabed, the Sun plays an important role to remove weakness of heart for pusillanimous persons and boons for skin disorders including leprosy and diseases related to eyes. As per our scriptures, the Aditi was the mother of all the Gods (Devas), the mother of all Demon (Daityas) was Diti and the Danu belonged to the mother of all criminals. Once, there was a mighty war between gods and demons where gods started to lose the battle with demons. To save the world from the violence of demons, the mother of gods, Aditi, venerably prayed to Sun for the triumph of her sons in that war.  The generous god Sun blesses the mother of gods and promised to assist gods to defeat all the demons by taking birth as Aditi’s son named ‘Sahastranshu’. Our great epics Mahabharata and Rigveda are full of stories extolling the glory and power of Lord Sun.

According to Samba Purana, Lord Krishna was also married to Jambavati who gave birth an extremely handsome and charming son named Samba by the blessing from Lord Shiva. His appearance and radiance was exemplary but later committed a sin and consequently afflicted with Leprosy after being cursed by sage Durvasa for mocking him. His youthfulness and charming looks began to abate and transformed into a very challenging physical appearance. He then worshipped Lord Sun sincerely and with the blessings from Sun, he became free from this physical affliction and recuperated his charming radiance. In Markandeya Puran, the wearer of this divine beads never faces any kind of problems in his/her life.

The special mantra to please Lord Sun as per Rigveda is as follow which should be recited with deep respect and considered to give extremely auspicious results.

This pious bead is quite expensive than other lower faced Rudraksha and rarely available in Nepal during a year. This bead is invincible, radiant, and displays very potent power as equivalent to Surya dev. That’s why it provides the quality of leadership and power of superiority over other people as well as removes dependencies and poor self-esteem. This Rudraksha shines the Administrative capability of a person and hence it is very advantageous for Administrators, Businessmen, and Politicians who must wear this Rudraksha for Name, Fame, Wealth, and Power. Furthermore, it also pacifies the malefic effects of Planet Sun as per the birth chart.

The mantra to be recited for the twelve mukhi Rudraksha according to the Holy Scriptures are:

General Benefits: - As the ruler of this mukhi is Sun which is terrifically powerful, hot, the light of a mystic fire, light of enlightenment to ward off the darkness, and brightness of compelling radiance, whose full emanation was too bright to bear for anyone. Therefore, this Rudraksha also upholds the Luminosity, Luster, Radiance, and Potency of Lord Sun, and hence, the wearer is blessed with all these integrities with the achievement of title, fame, power, and position. It also increases the robustness of leadership and superiority power, vitality and youthfulness, administration power for the wearer of this bead. That’s why, it becomes an exceptionally qualified tool for power deserving professionals like Lawyers, businessmen, Politicians, Leaders, Managers, Public administrators to achieve abundance in their respective professions. The emotional disturbances like fear, worries, stress, and suspicion of the wearer get easily dispelled from the mind and he/she will achieve a life full of happiness, prosperity, well discipline, and confidence. The wearer does not have to live a life filled with impoverished and releases their total dependencies on others. Specific problems in life resulting in lack of recognition and respect in the working area, limited proximity with friends and relationships, limited prospects for the future, lack of exciting and fulfilling life, lack of financial advancement.

Spiritual Benefits: - According to Padma Puran, the wearer will be absolved from the sins committed of killing animals like elephants, foxes, rabbits, men, etc. It is associated with the Manipura or Navel Chakra of the human body which can be energized by wearing this bead and availed with courage and conviction of high self-esteem. The Nepalese twelve mukhi variety emits an electromagnetic wave of desired frequency that influences our center of energy level (Chakra) and regrowth stability/harmony throughout the whole life.

Medicinal Benefits: - The twelve mukhi Rudraksha is a very suitable medicine to cure different diseases of eyes, mental disorders, bone diseases, indigestion, blood pressure, diabetes, fistula, dyspepsia, heartburn or nausea and problems of the intestine.  It is also regarded as the pharmaceutical gem for the person suffering from psychological disorders, stress, anxiety etc. Especially, it is the best for the complete treatment of Leprosy as per epics and also used to cure diseases of heart, lung, and skin.  It also has a vital role to regulate the operation of the digestive system, liver ailments, small intestine, and pancreas.

Astrological Benefits: - Just like one mukhi, this Rudraksha is owned by the planet Sun which is the king of all the planets and removes the malefic effect of the Sun. The malefic effects are Leprosy, weak heart disease, headache, piles, weakness, eye/skin/bone-related problems which can be cured by wearing this bead. It is also used to sanctify Vastu Dosh (directional fault) of certain infrastructure, institutions or enterprises as well as to counter any kind of black magic.

All the people who can find this type of bead can wear it to maintain a happy, healthy, and prosperous life. It is especially advised to wear power and authority deserving candidates such as administrators, businessmen, politicians, and senior professionals. Those personals who are riding their life in the privation of recognition and respect in the workplace, deprivation of personal relationships, financial advancement, and limited excitement in life should find out this bead to make their life colorful. 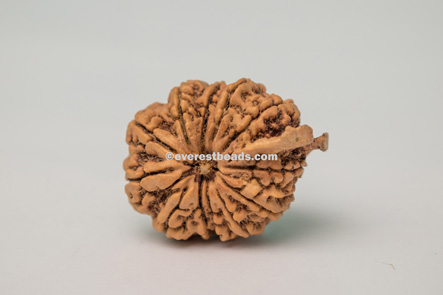 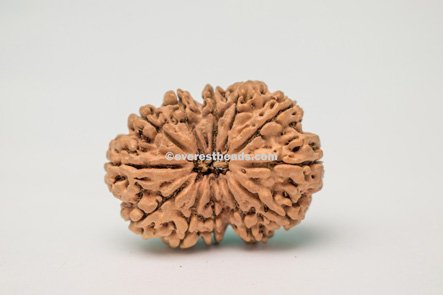 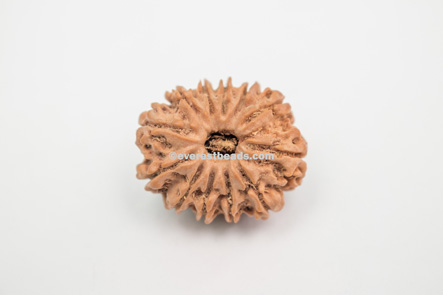 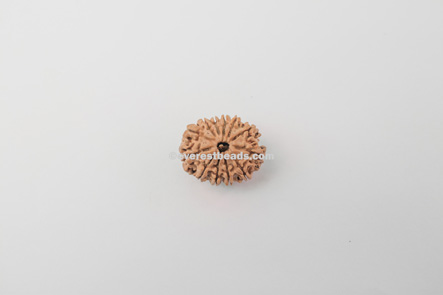