·         Paramehvari, the Rudraksha with eleven faces is a form of Rudra himself. The man wearing this bead attains the form of Rudra and becomes victorious everywhere.

The eleven mukhi Rudraksha is blessed by the Shri Hanuman, also known as the Ekadash Rudra according to Shiva Purana and Sanskrit texts like the Bhagavata Purana, the Skanda Purana. Lord Hanuman is described in the epic as the god of strength and victory, celibacy, Knowledge, perfect diction, infallible in physical strength, and elegant speech skill. As per the Padma Purana, the wearer of the eleven mukhi Rudraksha is said to be thoroughly bestowed with the virtues of the Shri Hanumanji, which are the abundance of boons like oratorical and negotiations skills, self-confidence, intelligence, physical and mental power. The wearer won’t have any cycle of mournful rebirth in this universe and attains the Salvation after death. It’s a divine form of Lord Shiva, which helps in awakening the higher state of inner consciousness and awareness. Because of its preternatural ability to command over physical senses to make oneself robust, this type of bead is best suited for meditation to secure the great devotion of the Lord.

Lord Hanuman is the central character of the Hindu epic Ramayana and a divine companion as well as an exemplary devotee of Lord Ram. When the world was terrorized by the evil torment of demon Ravana, Lord Ram took birth in this world as an incarnation of Lord Vishnu and Hanuman as the divine part of Lord Shiva to maintain the peacefulness of universe. He is known as the divine remover of dangers, hardships, or hurdles from human life and even pacifies the malefic effect of all nine planets. To receive these blessings, the wearer should chant the mantra of Hanuman Chalisa that concentrated the power of Lord Hanuman in simple stanzas.  He flew across the ocean within demon fort on his quest for Sita and sets fire across the entire Lanka (the kingdom of Ravana) as an admonition about an impending attack unless Sita is returned safely. Thus, his ardent devotion and efforts to remove one’s hardships cannot be scaled inside the human brain.

As per Rudra Samhita, there was a time where all the devas have been defeated by the Asuras (demons) and had to leave their heaven known as “Amaravati”. To hide from these ruthless demons, the gods had to run away for their safeguard and received shelter at the hermitage of the sage Kashyap.  The sage Kashyap felt pity for gods after learning about their heavy loss and went to Kashi (Banaras) to find out the possible ways to rescue them. The sage Kashyap performed a difficult and rigorous penance to please Lord Shiva because he is the destroyer of everything in this universe. Lord Shiva finally appeared in front of the sage Kashyap and promised to protect gods from the vileness of those evil forces. After blessing from Lord Shiva, the sage received eleven Rudras as a divine boon through Surabhi. These eleven Rudras finally defeated all the demons and offered the total protection to all the Gods.

In Skand Purana, Lord Shiva once said that the eleven mukhi Rudraksha is his form of 11 Rudras and all the powers are concentrated on this divine bead. The eleven forms of the Lord Shiva are Nirriti, Shambhu, Aparajita, Mrigavyadha, Kapardi, Dahana, Khara, Ahirabradhya, Kapali, Pingala, Senani. It is said that Hanuman is the eleventh form of Lord Shiva. This pious bead is also blessed by the Lord Indra which brings good fortune, the power of eloquent leadership skills, and the complete control over 11 senses (five physical, five sensories, and one of the heart or mana). As per the epics, one must wear it on the topknot-Sikha or around the neck like other Rudraksha where the wearer can expect to acquire the privilege equivalent of performing thousands of Ashwamedha yagnas (sacrificing horses) and donating hundred thousand cows to Brahmin.

The eleven mukhi Rudraksha is a very rare and mystical gift, nature has provided us which are mostly found in an oval shape in Nepal. This bead has perfect 11 lines starting from the top of head and stretches up to a bottom as well as an equal number of voids spaces available inside a bead. Those people who need to experience the celestial energy of all the eleven Rudras should highlight this divine bead to fulfill their destiny.

The mantra to be recited for the eleven mukhi Rudraksha according to the Holy Scriptures are:

General Benefits: - As the master of this pious bead, Lord Hanuman, is enriched with courage, bravery, and adventure, its wearer is also bestowed with a sign of courage and self- confidence, fearlessness, oratorical skill, leadership qualities and physical robustness that leads to an adventurous life. The wearer can excel in excellent command over speech and develop a great business, negotiation, and intelligence mind power. It also promotes the sense of happiness, longevity of life, provides victory over everything and protection from sudden threats. Wearing this Rudraksha makes the wearer enlightened with a higher degree of spiritual growth, material abundance, tremendous inner consciousness, enhancement in wisdom, and a sense of right action. It also protects the wearer from all kinds of deadly accidents and untimely death. The practice of enhanced concentration and excellent meditation power can be achieved with this pious bead that fulfills stability in business or profession through increased diplomacy.

Spiritual Benefits: - To pursue any spiritual path, the body, mind, and heart should be devoid of negative memories. For meditation practice to be effective, one should be free from the subject of the past, the present, and future and leads one self’s mind towards absolute in free space. This type of Rudraksha has been found to be an ideal tool for this as it is known to purify thoughts and to make a man worthy of embarking on a spiritual path. It is an excellent tool for those who want to enjoy the beauty of meditation and tantric realm. Those who are engaged in the yogic or tantric practices are benefitted by good health and assistance in hathyog, mantrayog, yam niyam, aasan, shatkarma and several tantric activities. This bead is closely associated with the awakening of Vishuddha Chakra or Throat Chakra (fifth chakra) which is the center of wisdom, willpower, truth, and power of choice.

Medicinal Benefits: - For a medicinal point of view, it is considered to be effective for stomach disorders, diabetes, liver, and breast problems. People suffering from heart disease, blood pressure, respiratory diseases like asthma, bronchitis are significantly cured by wearing this bead. It promotes the energy level of the body and rectifies the lackadaisical body into ebullient form.

Astrological Benefits: - Just like ten mukhi, this Rudraksha also doesn’t have any ruling planet and thus contains the command over all the planets as per Vedic Astrology. According to the epics, the Lord Hanuman is blessed with the power of all nine planets capable of neutralizing negative source of energy. It tones down the malefic effects of all the planet no matter how poisoned the arrangement of one’s birth chart.

The religious person who wants to achieve fearlessness and prosperity in their life must prefer this bead. It is also a matter of great choice for spiritually attached people through meditation and yoga. 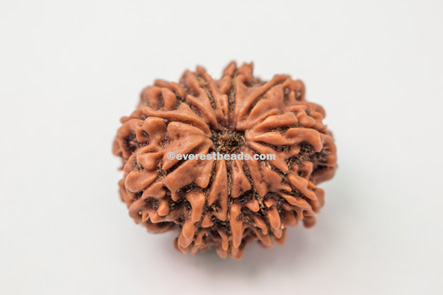