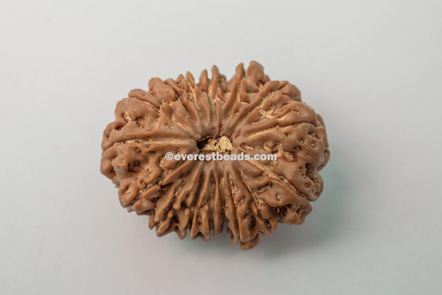 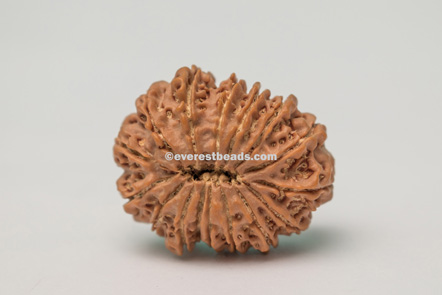 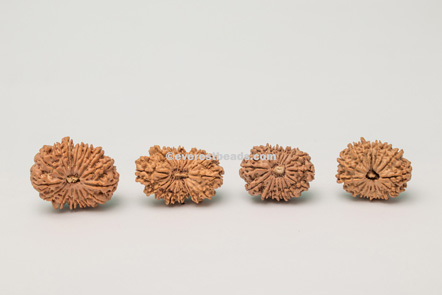 The sixteen Mukhi Rudraksha is dedicated to Lord Ram who is regarded as the 7th avatar or reincarnation of Hindu god Lord Vishnu and recognized as the embodiment of chivalry and virtue. It is also regarded as the Mahakaal form of Lord Shiva who holds the divine vibrations of Lord Mahamritunmjaya Shiva. Along with Lord Rama’s power, this bead provides the wearer with great human virtues like good family relations, respect, fame, and boundless successes. This Rudraksha is tagged with a beautiful name known as “Jai (victory) Rudraksha” and the wearer attains victory at all levels and every aspect of life. Because this unique feature, the path of the wearer becomes surmountable by the grace of Lord Mahakaal and shields a wearer from any kind of theft, cheating, appropriation, and guarantee his/her victory against adversaries. That’s why, it is an exceptional talisman to indemnify a person who is prone to dangerous accidents, misfortunes, debts, and burdening heavy court cases. The Lord Mahakaal makes a person very daring to face anything and won’t fear time and death despite its degree. Astrologically, People who are facing difficulties in their lifestyle due to unbalanced planetary position in their birth chart can be florescence their life with prosperity.

The mass of mythological and didactic resource of Lord Rama is thoroughly described in great holy Sanskrit book known as “Ramayana”.  He is the central character of the royal family who has grown up to be a very courageous, virtuous, and righteous prince loved by all. He was so strong that he was the only one to lift the bow of Lord Shiva during ceremony or Syambhar of goddess Sita. The ethical questions and moral dilemmas of his father lead him to leave his kingdom and is exiled to the forest with his wife Sita and his brother Lakshmana where they have to undergo so many impoverished and difficult circumstances. Of all their travails, the most noticeable one is the abduction of goddess Sita by Ravana, the demon king of Lanka followed by the friendship of monkey god Hanuman to gain freedom and destroy the evil Ravana through cosmic battle. After Sita is rescued, the Rama regained his kingdom but goddess Sita was suspected with her purity by the populace. To quench the thirst of the general public, Rama banished the goddess Sita to a hermitage where she had two sons.  Rama is portrayed as the model of justice, right action, ideal of conjugal love, and desirable virtues and Rama’s reign becomes the personification of the harmonious and responsible kingdom. 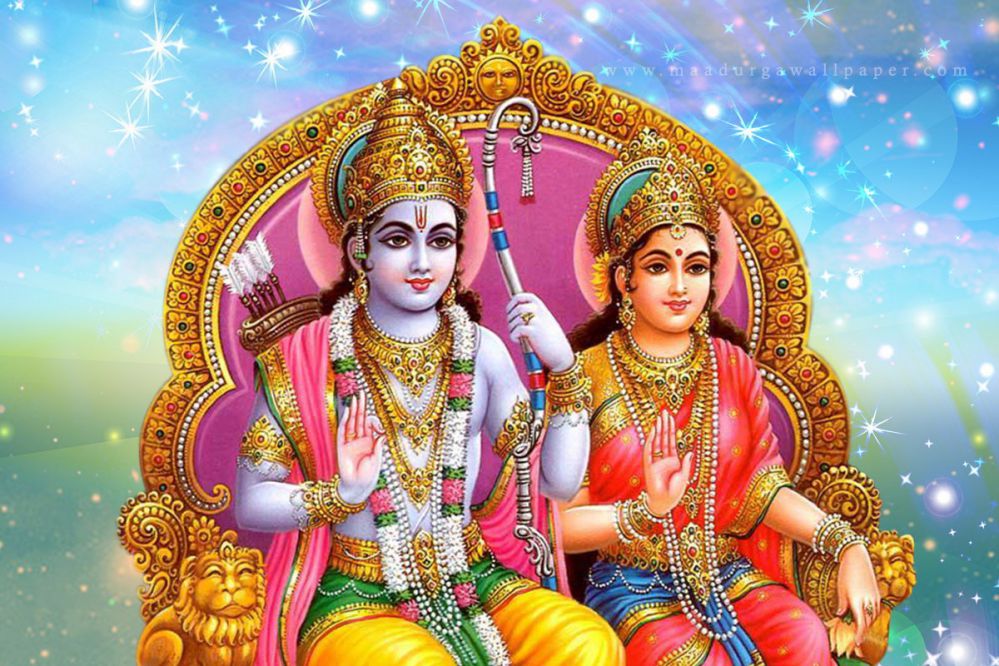 Prominently Lord Shiva assumed his fierce ‘Mahakaal’ form in extreme wrath state when he heard something much-unexpected news i.e. the demise of goddess Sati.  To please the Lord full of fire or Mahakaal Shiva, one must venerably chant Mahamrityunjaya Mantra (which is conceived by Sukracharya) undergoing pure devotion to him and this powerful bead is also equivalent to chanting Mahamrityunjaya Mantra 125000 times every day. As per Markandeya Puran, it was the same mantra which saved the sage Markandeya from his untimely death, and even Yama the Lord of Death turns back from the wearer of this Rudraksha. This piously available bead of Nepal origin is very hard to find and because of its mystical and extremely efficient value, it is highly demanded all over the world. This bead helps the wearer to achieve sixteen different levels of siddhis. As per Mahabharat, it is said that the master of bow and arrow, Arjun was able to point out the target of the fisheye while wearing this powerful bead. So, the wearer becomes an adept person with a transparent vision which results in all comforts and freed from all the sins. Because of its victorious power, it has become a choice of great interest for people who hold and exercise power to all the international layers.

The mantra to be recited for the sixteen Mukhi Rudraksha according to the Holy Scriptures are:

General Benefits: - Lord Rama has always achieved triumph over evil forces and arduous circumstances. That’s why, this bead is blessed with the energy of invincible victory in all the direction, breeze of positive energy, harmony, peace, and prosperity to the place where it is implanted. The person who was deluged into the rough situation of losing his/her beloved one, or prone to be blamed for unexpected acts, or about to get married, or needs to equivocal his/her rigid principle, or frequent threat from death gets rewarded an inner strength to combat such terrific moment. The power Lord Mahakaal pacifies every hardship of human beings in such a way that even a god of death, Yama fears in front of the wearer. So, problems like the anxiety of theft, accidental death, losses, fires, injuries, and defamation become a very minor issue for the holder of this mystic bead. The spiritual connectivity with Lord Mahakaal buttresses the higher authorized person to face any disputes, litigation and supports his/her confidentiality. The regular chanting of Mahamrityunjaya mantra amplifies the positive energy of a person with a pleasant mind enriched with tranquility.

Spiritual Benefits: -   This mystic bead is an epitome of Mooladhara /base Chakra that is responsible for the advocate of grounding energy. Awakening this chakra has direct link with the unconscious mind, where our deeds and different familiarity from past lives are stored. As per the law of universe, this Chakra represents the different possibility of our future destiny. It is also found to strengthen Swadhisthan Chakra which represents the water element in the body. The wearer becomes very down to earth and a very responsible citizen of society who becomes a bearer of fortitude as well. The higher level of spiritual satisfaction surrounds the life of wearer with good health, wealth, peace, prosperity, and contentment. The joint power of Lord Mahakaal and Rama amplifies the morality of wearer which in turn makes a person very religious towards almighty god and lives his life on the path of truth. This devotee ultimately attains Punya (Boon) of seven births.

Medicinal Benefits: - The sixteen Mukhi Rudraksha is a great healer of several deadly diseases. It fights back against some of the life-threatening sicknesses such as epilepsy, mental disorders, kidney, and several other chronic diseases. It is a great talisman for the human brain and strengthens mental, sensory abilities, mental calmness very strongly that ward off stress, anxiety, fear, and worries from the wearer. As per ancient texts, a sixteen mukhi bead is highly recommended for problems associated with Uterus, intestine, urogenital system, and lung infections.  The wearer can quickly realize the potential power of divine vibrations that would ward off negative energies, dark power, and evil spirits. Furthermore, this mystic Rudraksha bead emanates electromagnetic vibrations that positively impact your body energy centers, viz Chakras, and bring back harmony and order in wearer’s life.

Astrological Benefits: - The sixteen Mukhi Rudraksha is ruled by the planet Moon which is lord of human emotions and mental peace. That’s why, it nullifies the malefic effect of planet moon and brings confidence, resilient and daring personality. According to Vedic astrology, it is said that the bad positioning of all nine planets can be nullified and restored into a peaceful life.

Some people are extremely disturbed with their adversaries that ruin the peace of their life to the equilibrium of their family. To overcome such enemies, this divine bead is a great set of weapons for them to restore a vibrant atmosphere among their family, friends, and bring a matter of harmony and tranquility in the family circle. So, this is specifically auspicious for people following professions like businessmen, politicians, leadership, managers, public and private administrators to successfully perform their duty to achieve good name and fame.  Because of its power equivalent to Mahamritjyunjaya mantra, it should be worn to overcome series of dreadful events who have faced the fear of death or has less courage to handle the situation properly and to avoid divorce between partners.