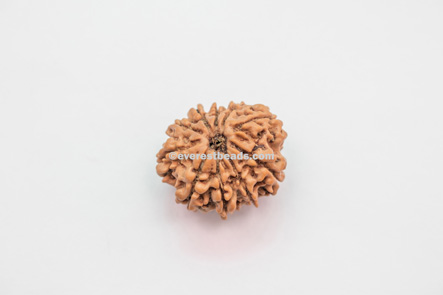 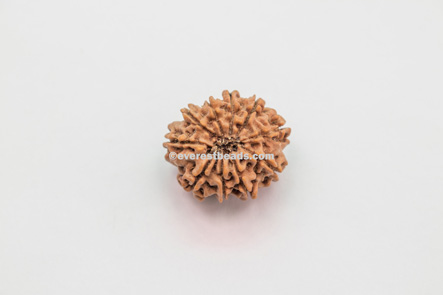 ·         Maheshani, the Rudraksha with ten faces is Lord Janardan himself. O devesi, by wearing this, the wearer shall achieve the fulfillment of all desires.

According to the Shrimat Devibhagwat, Nirnaja Sindhu, Mantramaharnava, the ten mukhi Rudraksha is ruled by the Lord Vishnu (also regarded as Lord Krishna), who is the preserver of this universe. Lord Vishnu is the principal deity of Hinduism and one of the Trimurti along with Lord Brahma and Lord Shiva. Indeed, to represent the superiority of Lord Vishnu, Brahma is considered to have been originated from the lotus flower which grew from Vishnu’s navel. In some scriptures, it is also regarded as Lord Krishna but Lord Krishna is synonymous with Narayana and is of the eighth avatar. In Vaishnavism, Lord Vishnu is highly venerated as the Supreme Being as identical to the metaphysical concept of the Brahman (the ultimate reality of this universe), and highly esteemed for adopting ten different incarnations to preserve and shield from the ultimate evil and chaotic threats. According to Rudrakshajabalopanishad, the ten mukhi Rudraksha is assigned to the Yamaraj, the god of death and the Dashdigpal, the controller, and the warden of the ten directions.

As per the Rigveda, the Lord Vishnu was born from the Hiranyagarbha, literally known as the cosmic egg or golden womb of the universe that existed before creation. After the great annihilation of the universe, there exists only darkness everywhere. Everything was in the deep state of the sleep in a static position. By the grace of the Lord Syambhu (Self-generated), it created the primordial water all around the universe which is filled with darkness, and a seed of creation was established in the form of the Golden womb, Hiranyagarbha.  According to Sri Mad Bhagavatam, Lord Hari/Narayan was at the beginning, who was pious of the principle of the creation, sustenance, and dissolution manifests himself as the golden womb and created the whole universe. As he is the supreme Purusha and creator of the whole universe, encompassing all things, everything within himself as the supreme intelligence. 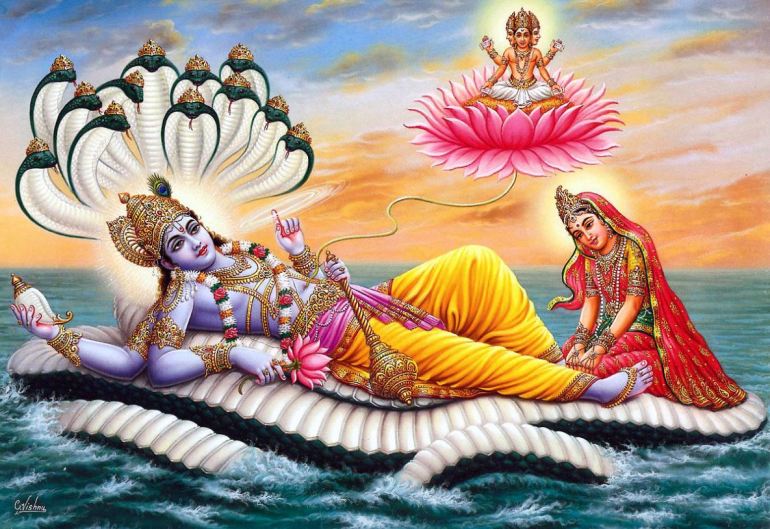 Due to the correlation of 10 Mukhi Rudraksha with Lord Vishnu, it bestows the wearer with the power of the creation and perseverance and provides safeguard to his/her entire family. It also represents the gods of the ten directions, known as Dashdighpal and protects the wearer in all the ten directions from evil spirits, ghosts, all sorts of the negative things, black magic, evil eyes, etc. So, it is highly advised for the poor souls lost amidst darkness who has failed to find out their direction, profession, and purpose in their life. These souls would be enlightened to follow the path of “Dharma”. The Lord of the death, Yamaraj also bestows his blessings to this bead and the wearer gets pacified from the untimely death and accidents. Some scriptures appoint this bead to Mahasen (Kartikeya) and Dash Mahavidya (10 powerful goddesses of knowledge) that grants the wearer with the supremacy to defend against the terror of apparitions (that someone is behind you).

Ten mukhi Rudraksha is rarely available in nature but the price is lesser as compared to nine mukhi Rudraksha. The Nepalese variety is available in round and oval shape and quested more any variety. The Rudraksha alone is the blessing of Lord Shiva but ten mukhi variety brings the joint power of two mighty Lords of the universe, Shiva and Vishnu, together to riddle the hellacious situation, unexplainable problems, menacing threats and strong disputes like court cases. A Narayan Kawach made up of 10 numbers of the ten mukhi Rudraksha and 1 number of the one mukhi Rudraksha is a powerful weapon to achieve lenient triumph against any antagonists at any sectors like courts, businesses, profession, etc. This bead doesn’t have any ruling planet and thus nullifies the ill effects of all the planets.

The mantra to be recited for the ten mukhi Rudraksha according to the Holy Scriptures are:

General Benefits: - The ten mukhi Rudraksha, controlled by the guardian of ten directions, has a significant effect on Vastu dosh (directional faults) which can adversely ruin the outcome of running the business. So, the fruitful business scenario can be created by wearing this bead leading in the market. It provides a matter of success in their favor against adversaries in the big court cases, legal actions, land deals, and relieves one from debts or losses. This Rudraksha also protects a person from any kind of black magic, evil eyes, evil spirit, unexplained fear of being followed by someone, etc. and eliminates all kinds of Evil beings. The bead becomes a pure symbol of divinity because of the conclusive united blessings from the Lord Vishnu, Yamaraj, Dashdighpal, Kartikeya, Dashmahavidya- it is considered invincible power to achieve wealth, power of relationship and creativity. Betaals, unperceivable negative energy, the shadow of evilness, Brahmarashas, all are tackled by the divine power of this bead.

Spiritual Benefits: - The human chakra of the wearer are well energized and enlightened to activate the conscience. It also safeguards the person from evil spiritual force to get away from its domain. Furthermore, all the sins done by the 10 organs are cleansed towards salvation.

Medicinal Benefits: - The effects of insomnia thoroughly get cured by the power of this divine bead and march one’s life towards tranquility. Diseases like a conceivable problem, hearing problems, fear of someone standing behind are easily controlled by wearing this bead.

Astrological Benefits: - This Rudraksha doesn’t have any ruling planet and thus contains the command over all the planets as per Vedic Astrology. So, it is useful to pacify the effects of nine planets in one’s birth chart that provides a sense of security. The Lord Vishnu or Krishna becomes pleased with those wearing this bead with the hymn and provides peace and happiness to the wearer.

Those who are facing extreme difficulties with their business and about to be bankrupted should wear this bead to remove negative fault from an astrological point of view. The people suffering from the problem of insomnia, the problem of instability of life, those who lost to find out the true purpose of their life can be fortified by wearing this powerful bead. So, these people must find out this bead to experience the combined effect of Hari-Har. 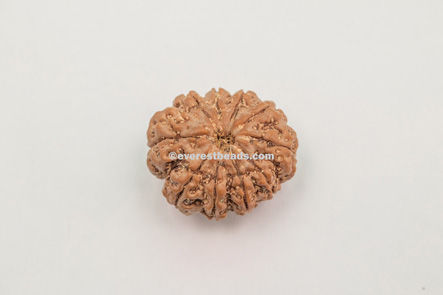