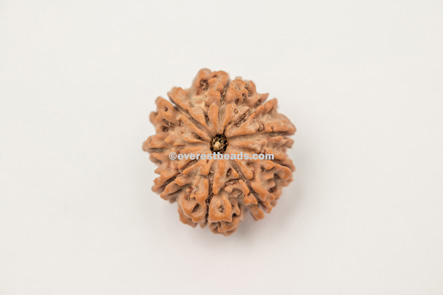 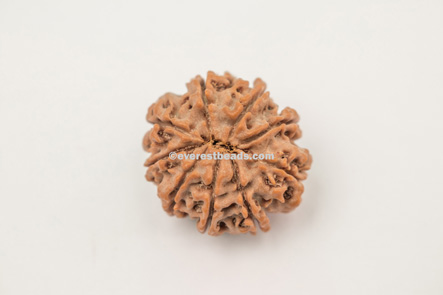 ·         Nine mukhi Rudraksha is the form of Bhairav and Kapilamuni. Its presiding deity is the Goddess Durga of nine forms, Maheshwari herself. This Rudraksha should be worn on the left hand with great reverence. Then, he shall certainly become the almighty of the highest level like Lord Shiva.

The nine mukhi Rudraksha is blessed by the magnificent Goddess Maha Durga and her nine divine forms. She is regarded as the goddess of war, the warrior form of Goddess Parvati whose quintessence lies on shielding the evil and demonic forces whose presence threatens the peace, harmony, and Dharma (the power of the light over darkness). In Shaktism tradition of Hinduism, she is addressed as the ‘Shakti” and known as the eternal power and primordial energy of the entire universe. The divine energy of the goddess ‘Shakti’ is the cause of the origin of this universe, where she is equated with the concept of ultimate reality called Brahman. The nine forms of Durga is known as Navadurga and this divine bead is worn for the benevolence of the goddess as a defensive shield against all the evil and oppressed forces. These nine different forms of Maha are- Sheilputri, Brahmachari, Chandraghanta, Kosshmanda, Skandmata, Katyayani, Kalratri, Mahagauri, and Siddidhatri. She is also the ruthless form of the mother goddess, who exposes her divine wrath of anger against the devil forces for the liberation of the oppressed, and entails destruction to empower creation. According to Padma Puran and Shrimat Devi Bhagwat, this bead is also blessed by the Lord Bhairav.

Once upon a time, there was a seemingly invincible buffalo known as Mahishasura, who was the king of the demon. He was a staunch worshipper of Lord Brahma and achieved a boon from Lord Brahma after going a difficult penance for thousands of years. He became so powerful that none of the Devas (Gods) including Lord Shiva and Vishnu couldn’t defeat him. He poisoned the entire universe with his wrath of evilness. After considering the situation, the joint power of Lord Brahma, Vishnu, and Maheshwar (Shiva) along with other gods radiate a great mass of blazing energy that coalesced into Shakti (a formless energetic entity that is feminine and divine) and regarded as the incarnation of Goddess Parvati. With her beauty bound no limit, invincible power, and riding a lion with her many hands guarded by powerful weapons, she was endowed by the power of every deity. As soon as the demon king Mahishasura saw her, his heart quickly melted down because of her extreme behold of beauty and promptly proposed for marriage but quickly get rejection.  As the demon king, Mahishasura knew that he cannot be defeated by the woman and this vainglorious lead to the battle. Goddess Durga fought with him for about 15 days during which he kept changing into different forms to mislead her. On the final day, he was pierced by the Trident of the Goddess when he was changed into Buffalo and decapitated him. By the wrath of the goddess, the universe was saved and freed from the evil force ever. 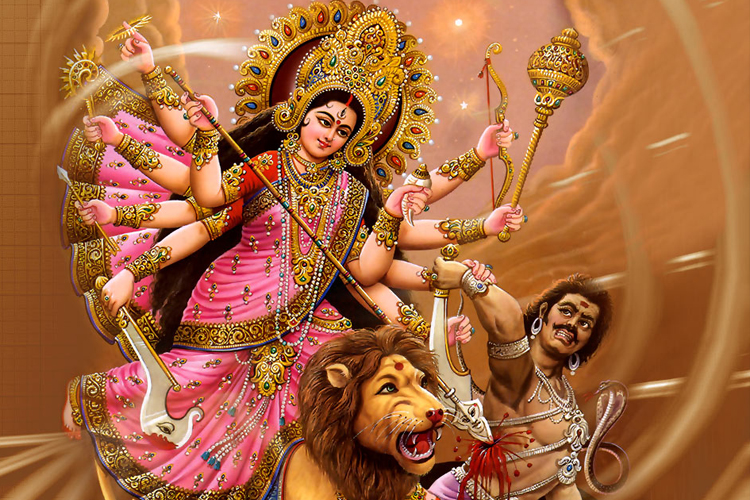 According to the Rudrakshajabalopnishad, this type of Rudraksha bears nine different forms of power from Navadurga that blesses the wearer with energy, courage, fearlessness, dynamism with a lot of material accomplishment which leads to a better self-confidence thereby helping him achieve Success, Name & Fame. The nine mukhi Rudraksha is among the most auspicious bead blessed by the divinity of the feminine power that exonerates the heinous sinner from his/guilt and makes that person fearless and stress-free. The devotee of the supreme power of this universe, Shakti, should wear this Rudraksha which is the shield of goddess Durga against anything and everything that might harm the wearer. As per Shiva Puran and Shrimat Devibhagwatam, this pious bead is also blessed by the Kaal Bhairav and Yamaraj who is the god of death. Because of this, the wearer strongly defends Kaal (time) and makes that person no more afraid of death. It is a life-changing weapon for the women/housewives who are tremendously disturbed in their mental peace by their husbands and children and get showered with invincible force to combat these issues easily.

The shadow planet “Ketu” is the master planet of this powerful bead that strengthens the weak debilitated Ketu in their birth chart and spread the beneficial effect of this planet. It is believed that it also has the power to remove the negative effect of all nine planets. It is among the rarest type of beads available in Nepal and Indonesia but the price of the Nepalese variety is much expensive over Indonesian one due to its enormous divine power, authenticity, and popularity. For the best result, this type of Rudraksha should be worn on the left hand. It is also beneficial to sublimate many health-related issues of mind, skin, eye, fever, and pain-related diseases.

The mantra to be recited for the nine Mukhi Rudraksha according to the Holy Scripture are:

General Benefits: - This Mukhi of Rudraksha is equally important from both sides of spiritual awakening and materialistic benefits which hold all the powers of nine goddesses known as the Nava Durga. Persons experiencing unknown fear, depression, physical weakness, lack of concentration are turned into daring, audacious, dynamic, and fearless personals. Because of its feminine power, this bead is a life-changing tool for women who are crawling in their dejected life patterns. People who are willing to attain the domain of spirituality to achieve an inner peace of mind, protection, and self-confidence connect themselves with this bead. The Goddess Durga enriches the wearer with self- power and makes wearer powerful, brave, courageous, and self-confident and offers relentless success and prosperity to the entire life span.

Spiritual Benefits: - The power of this bead burgeon the wearer towards spiritual predilection and devotion to gods will increase significantly. It is associated with the Sahasrara Chakra or Crown Chakra, located at the crown of the human body that is associated with the pursuit of spiritual peace, universal knowledge linked with divine power, and connecting to the higher form of consciousness.  Hence, the wearer gets energized and enlightened by this momentous chakra. Sins committed by a person get absolved. Moreover, wearing this divine bead is like getting one’s conscience purified through fire.

Medicinal Benefits: - It regulates the functioning of the brain and nervous system to maximum efficiency so that the wearer will be free from neurotic disorders, psychological disorders like phobia, worries, and hallucinations. It is also a curative medicine for the diseases of the stomach, body pains, skin diseases, eye problems, lungs, etc. Furthermore, it also resolves the diseases of the sexual organs, abortions, and breast-related issues.

Astrological Benefits: - The ruling planet for this type of Rudraksha is ‘Ketu”, commonly regarded as the south node, which bestows spiritual tendencies, asceticism, and nonattachment to worldly desires, salvation science, and ambitions. It is beneficial to mitigate the malefic effects of the Ketu such as the diseases of the lungs, fever, eye pain, bowel pain, skin disease, etc. One of the greatest fear of the birth chart known as the “Kaal sarpa dosh” can be mitigated by wearing this type of Rudraksha.

People having unexpected fear of death should prefer this bead as the divine power from the Lord of this universe. Housewives who are mostly concerned about their husbands and children that disturb their peace living must wear this pious bead to rekindle the original of living. Women should wear this either singly or combined with other 10 and 22 mukhi varieties that make it more powerful. 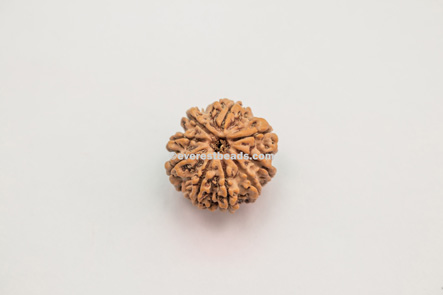