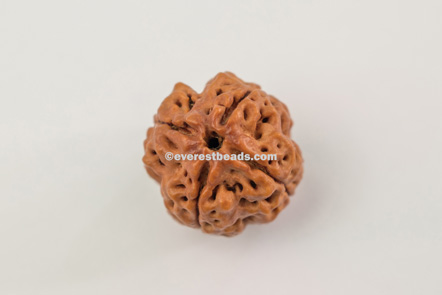 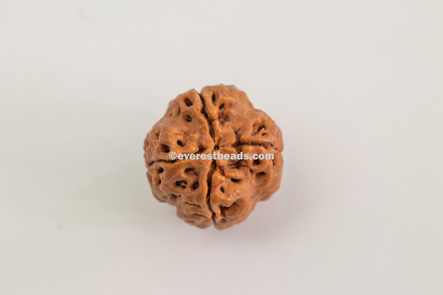 Ø  Four faced Rudraksha is the form of the Lord Brahma. It quells the sins of killing a human. Its contact and vision instantaneously bestows the achievement of four aims of the life.

The supreme Hindu trinity god Lord Brahma, also known as the creator of this universe, is a master of this type of Rudraksha. He is known as the creator of sacred four Vedas, “Vedanatha” and abode of knowledge as well as creativity. The Lord Brahma is synonymous with the Vedic god Prajapati, Hiranyagarbh, Brahmanspati, or Vishwakarma. Several Puranas describe him as taking birth from the lotus flower, evolved from the naval of Lord Vishnu whereas other Puranas mentioned him as emerging from Lord Shiva and his aspects. Brahma is depicted iconographically with four faces and four arms in Vedas in such a way that each of the four faces represents four unique directions and every four hands represent the knowledge of Vedas (Ancient Hindu Scriptures), mala (rosary) symbolizes loop of time, Sruva symbolizes the methods to feed sacrificial fire and Kamandalu (utensil) with water represents means where all creation radiates from. The consort of Lord Brahma is Saraswati (Savitri or Gayatri), the goddess of knowledge and she is known as the “the embodiment of his power, the instrument of creation and the energy that drives his actions”. 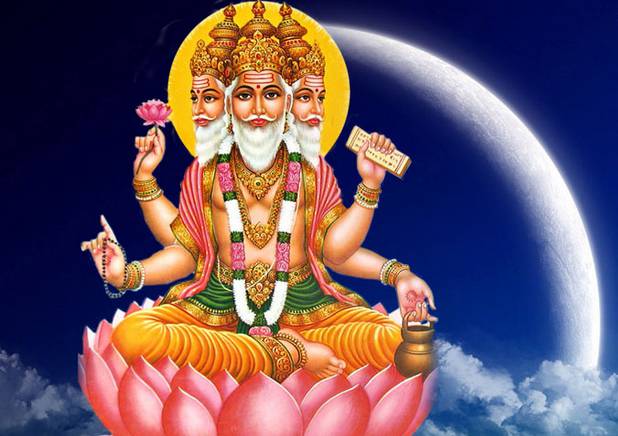 So, it is found from the epics that one who wears this Rudraksha attains the highest level of dwij (twice-born), and transfers himself towards an utterly novel personality and assumes his responsibility differently in his/her life. The dwij concept is based on the Hindu caste system but people have entirely misunderstood this concept and made them based on lineage instead of the profession-based. Because of the close connection with Lord Brahma, the wearer of this Rudraksha is bestowed by a very intelligent mind, balanced mind, and blessed by Goddess Saraswati, the goddess of wisdom. Because it bears the essence of four Vedas, it blesses the wearer with four essentials of life – Dharma, Artha, Kama, and Moksha.

According to RudrakShajabala Upanishad, the four Mukhi Rudraksha is described as the form of Lord Brahma as shown:

The four mukhi Rudraksha is easy to obtain and is the most commonly available Rudraksha. The Rudraksha bead of the four mukhi Indonesian variety is quite smaller in size than that of Nepalese variety and the shape of the beads starts changing towards oval instead of round. A wearer of this Rudraksha becomes highly erudite since his/her power of concentration, deliberation, and learning are strengthened distinctively as well as his/her memory power also increases. Therefore, he can retain whatever knowledge he acquires.

Laws are meant to punish the perpetrator that is guilty of the crime and take their course of action but can’t free them from spiritual debt. The sole purpose of this type of Rudraksha is to purify the soul and mind after remorseful action, to create a consciousness, and to create a person repent truly for the action.

The ruling planet of this type of Rudraksha is Mercury that benefits one from the good vibration of this planet.

The mantra to be recited for the four Mukhi Rudraksha according to the Holy Scripture are:

General Benefits: - As it is the precious gift of nature but representing the divine power of Lord Brahma, the wearer gets benefitted from the shining intelligent eyes, creative power, and wit just like four-headed Lord Brahma. The person will have limitless knowledge and a vast sum of learning power with an enhanced focused mind. It should be a great choice for one who is lacking a vocal power and wish to boost their communicative and mellifluous speech delivering capacity among the public mass. The four mukhi Rudraksha blesses one with everlasting fame in four dishas (directions) and is suitable for all the four stages of the life (Celibacy, family life, detachment from family life or worldly life and finally repudiation of the world itself- “Bramacharya, Grahastha, Vaanprasth, and Sanyas”). It is a golden gem for those academically involved personals like a student, teacher, scientist, intellectual, scholars, artist, writer, and journalist to improve their concentration in studies, improved memory, intelligence, and logical thinking abilities. Furthermore, children facing shy and timidity, intellectual dullness, when choosing this type of Rudraksha, will be out of these issues and feel very special.

Spiritual Benefits: - According to the Shiva Puran, this Rudraksha exculpates a person from the sin of killing for the Rudraksha of all mukh. It can be worn to gain great success in the field of duties (Dharma), wealth (Arth), leisure/pleasure (Kaam), and salvation (Moksha) or eternal freedom from the cycle of death and birth. This auspicious Rudraksha beads helps to achieve the highest level of spiritual faith and offers insights. It has a special property that vitalizes the 7 energy chakra contained in the human body, the center of energy inside the human body that is spinning like the fundamental element inside the atom, with the divine core of energy and desired frequency. Aside from this, the malas or rosaries made up of this bead is highly effective in making a person calmer and healthier.

Medicinal Benefits: - This type of Rudraksha is a central motif of mind, thus cures every memory-related problem. The different kinds of diseases like the disease of the throat, ear, and nose, paralysis, sexual problems, gall bladder diseases get extremely beneficial results within a certain range of time. All the disorders related to mind like memory loss, all mental ailments, mental disorders get avoided. Moreover, ENT related problems, diseases affecting hands, arms, lungs, and thyroid glands get cured with a satisfactory outcome. This type of Rudraksha on boiling with milk for about 15 minutes can be also used by those facing memory and mental problem issues. It can be put in the glass of water for 20 hours so that it gets soaked by water. This water can be used further taken safely on a regular basis to improve memory power. This kind of bead along with five or six mukhi and consisting of up to 550 beads can be used to make a crown for the head therapy. This kind of crown is used in the head for the treatment of any mental disorder.

Astrological Benefits: - The main ruling planet for this type of Rudraksha is Mercury which is regarded as the indicator of intelligence, commerce, education, communication writing, books, humor, scholars, thieves, and astrologers. According to Vedic sage Parasara, “Mercury is endowed with the attractive frame of the body and capacity to use words with different meanings”. It eradicates the malicious effects of the planet mercury such as dullness of mind, lack of grasping and comprehension power, difficulty in effective interaction, logical thinking, etc. So, four mukhi Rudraksha nullifies these negative effects of mercury and pleases Goddess Saraswati.

The work involved in the modern era is found hardly of those who are based on static knowledge. Instead, constant and continuous upgrading of the mental setup is required to adapt and survive the contemporary issues and challenges, present days have plotted so far. So, it is best for those scholastic persons, academicians, and all those engaged in mental work. A total of 3 beads or single Rudraksha along with six mukhi can be used for the children of the age below six for creative learning and better performances. 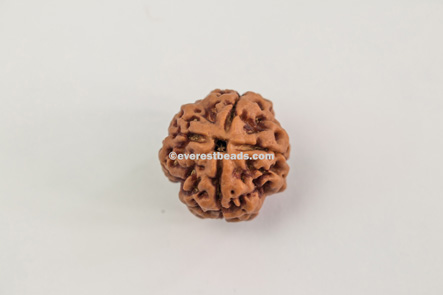 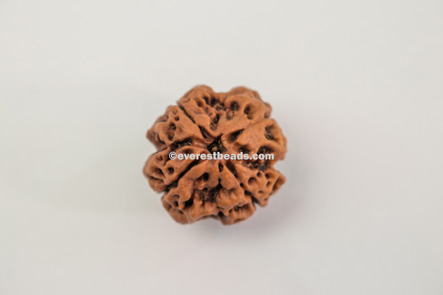